Ariel
Little Spanish Ariel was named from Shakespeare’s “The Tempest” because he was found under a bush, starving, covered with oil, and near death. This tiny young cat had been abandoned and was not making it. Cats have a way of knowing humans whom they might trust. He called to Deborah. His fear still took hold and Deborah’s initial reward for gathering him up to help him were bites and scratches. She nursed him back to health and a true friendship was born. When Deborah brought him home from Spain, he met his forced siblings, Kira and Merlin. A fast friendship in the new family was not exactly what happened, but tolerance and some comfort in each other's company finally came to pass.
I first met Ariel not long after. He was a bit nervous about new people, but he could see in me someone that was not a worry. Deborah told me he did not like being picked up. That is the wrong thing to say to me. I moved carefully toward him, introducing myself. He was happy with that, so up he came into my arms. My first real greeting with this fine, loving cat was to have him throw his paws around my neck and put his head under my chin, purring happily. And so, another new friendship was born.
Ariel was a heat seeker. He loved his heated bed, but he loved the lesser in temperature human warmth more. He would, usually, politely check to see if we would accept his nuzzling. Sometimes, he would just assume and take his place next to us in bed. Like all strong friendships, there were ups and downs. He could be annoying at times, and he could get grumpy if we did not do just want he wanted on occasion. But, forgiveness would immediately follow, as if we really could do no wrong. In full health, Ariel, I called him Rurr Rurr, walked like a tiny bulldog. His countenance was regal. He loved us and when not sleeping, he would show us every chance he got.
Deborah worried a bit that Ariel’s traumatic youth might take him from us early. Perhaps she was right. At 14 years old, Ariel’s kidneys started to fail. With care and the right food, it looked like he might have years. Such would not be the case. Cats instinctually hide how they are feeling when they are sick. Ariel was a pro at that. When Deborah and I left for Death Valley for my training session in July, he appeared well and we were content to leave him in the capable hands of our long time cat sitter. He likely stayed in his bed the times she visited, so she had no reason to worry, either. When we returned five days later, an Ariel made up of little more than skin and bones greeted us. His kidney function had declined drastically. We knew the end would come much sooner than we wanted. We would make his last months or weeks good ones. We finished preparations for Death Valley and we left believing we would find Ariel greeting us as always, if not the muscled kitty he once had been.
The call came Monday evening, as I headed toward Stovepipe Wells. Somehow Deborah had cellular connectively where we had never seen it before. The call was weak. She did not want to tell me what the call was about, but I read it on her face. While we were somewhere on the road to Stovepipe Wells, Ariel with dignity and compassion would be sent to cross the Rainbow Bridge. His time had come. I headed into the setting sun with a heavy heart, and determination in my eyes. The hot breeze quickly dried the tears.
“You will never leave me.
nor shall anything part us
You are my cat and
I am your human –
Now and onwards
Into the fullness of peace”
-- Hilaire Belloc
Done too soon
It was a grand day in the desert. The air was clear and hot. The start at Badwater Basin was shaded by the adjacent hills. The rising sun was brilliant and the distant mountains shown in glorious purple. While my crew did what they needed to get ready, I wandered out onto the salt flat feeling joy and wonder that I had once again made it to the start of a wondrous adventure. I was happy and comfortable. I was ready.
The start of a solo adventure is very much different than the nervous, almost chaotic rushing around of a race. There is no one there to tell you where to be and when. There was the usual discussion about where the start is exactly, as if a few feet really matter, but I told them where it was so that the cameras would be in place. When I was ready, I quietly walked to the start line and began. 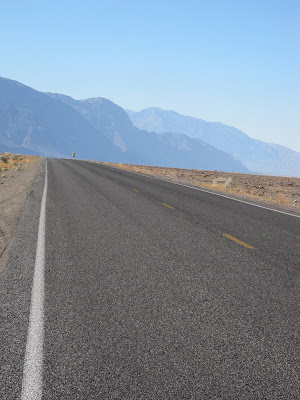 I felt fabulous!
Everything was working. The concern over my blood pressure dropping too low was soon found to not be a problem. I was staying hydrated. There was little doubt I would make it to Stovepipe Wells if I continued to be careful and stayed within myself. It got hot – about 118 degrees F near the Beatty turnoff. My urine darkened too much at one point and I stopped until I went again a much lighter color. For a period of time I was “third spacing” fluid and bloating, but that would decrease, too. It appeared the only issue was I had triggered a quick gag reflex with my very first intake of electrolyte capsules. They went in, and rapidly reappeared with that tell tale noise. My newest crewmember reacted and the others and I said, “Better get used to that!” I got them down with a Coke. That issue continued for some reason. Once it started, it did not stop and I had to take all the supplements with a Coke. At one point when climbing the hill to Sea Level at about 40 miles, my throat dried a bit and I coughed. That set me off and I left a gallon of good fluid and food on the side of the road. It did not worry me too much, but I did take a few minutes to replenish. My legs, my feet, my attitude were all great.
Then I learned about Rurr Rurr.
Though I was sad and I felt a bit guilty Deborah and I had not been there for him, I was not going to let that stop me. I just needed to work it out in my head and keep my feet moving. I did that. It is what I had to do. 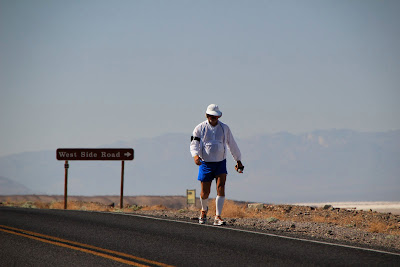 
To Deborah, there are no words. You reluctantly took on the duties as crew chief last year, even though you where not fully on board with the idea of what I wanted to do. Then you did it again this year. Your organization and your care were obvious. I cherish you and everything you do. I look forward to the rest of our lives together.
To my MD, Jeff Denham, I thank you for all that you have done. I would not be out there if it were not for your expert and generous care.
To Lisa, Danny, Willy, Tim, Meredith, Kristen, Dave, Ian, Marshall and so many more, thank you for your inspiration, support, and kind words.
To Dick, Rich, and Rhonda, thank you for your years of inspiration and support. You gave me Death Valley to do with as I wished. Thank you for that.
The countdown clock at the right side of this page says emphatically what my plans are for next summer.
I will be back!!  I will be back once again, “To strive, to seek, to find, and not to yield.” – Tennyson
I can't wait!
Dreams do come true.
Onward.
“Badwater” Bill
Tujunga, CA
Posted by BILL LATTER at 4:53 PM