An Open Letter to the Mission Operations Team

A couple of weeks ago, I posted the following on Facebook -

"Have you ever woken up one day and realized your life had become out of control with work stress? Was it impacting everything - sleep, work, eating, the things you love most like training and people? Yeah? About two weeks ago, I woke up and realized just how bad it had gotten. It had to end. And so it is. My work life is now in transition out of the impossible job I was doing to something much, much different. I already feel better. Why does it sometimes take the proverbial sledge hammer to the forehead before one sees the obvious damage being done?"

Today the transition took place. My life is now on a new, different, and exciting path. In an open meeting, I spilled my guts for a moment and proceeded to forget the most important thing. So, I followed up with a note. Here it is….

For the Mission Operations Team -

For those of you who could not make the Mission Ops All Hands meeting this morning - as of now, I am transitioning out of my role as Associate Director of Mission Operations. Nancy will be assuming that role, at least for the time being. Karina will be her B703 resident deputy. I will be in the Science Operations side as Manager for Science Support. You are in excellent hands. That was important to me.

This is a voluntary move I am making. The reasons are complex and some are rather personal. It is also a good time to make such a change for the re-compete proposal, which motivated the timing, in part.

There was a lot I could have said at the meeting, and did not. One item that needs to be said - Thank you for all that you do. It has been a most awesome pleasure and experience working with you. In my time here, I have watched a small struggling Mission Operations team try to do more than anyone could, yet it still got done. As we moved through the troubled early flights and became more and more of an operating Observatory, you grew in numbers and you came up to speed very fast. These were troubled times for SOFIA. Systems did not work. The aircraft was giving too much trouble. We were even canceled outright. But, you kept going.

You are all talented and dedicated individuals. As a team, you are better than the sum of the parts by a significant amount. When we should have been grounded, you never gave in and seemed to do magic to get flights off. Maybe it was not graceful or pretty, but the key thing that we are all here to make happen was we got some science done when it seemed like it could not happen. It was amazing to see. This is not how we wanted to keep going -  indeed, we could not have done so. But, fighting for flights and data has become part of what flying SOFIA is about. You make it happen when it is easy, and when it is hard. It is just that simple. 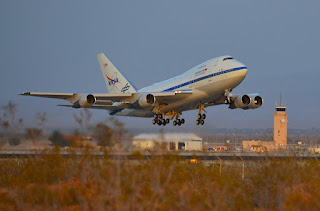 If you break it down into what it is that MandE and MOPS do, it is all a dance leading up to that point in time when the TO turns the telescope over the the science instrument. All the planning, all the handoffs, meetings, and interfaces are all for that one moment. That is when SOFIA is doing what she was built for and does so well. No one does it better. I am fairly certain that if this team were suddenly asked to bring home the crew of Apollo 13 (or maybe a stranded crew on the ISS….) safely, you would get together and make that happen, too. I do not believe that is hyperbole.

Now I am going back to being a bit of a scientist. It is from that viewpoint that I write the next part. SOFIA is a grand experiment in the long tradition of such in astronomy. Infrared astronomy remains in its infancy. It has been within the time of my career that we have gone from having just tantalizing glimpses of what might be out there to an understanding that within the infrared part of the spectrum one can find many of the real secrets of the Universe. While visible light astronomy has been going on since Man first looked up, infrared astronomy is brand shiny new. We are still learning how to do it, and it is like learning your first steps. It is hard. The technology is hard and uncertain. The physics is hard to understand. The Earth and what is nearby make it hard to do and get a clear view. SOFIA is hard. It might be an old aircraft, but what it does and how it does it are all difficult regardless of its physical age. 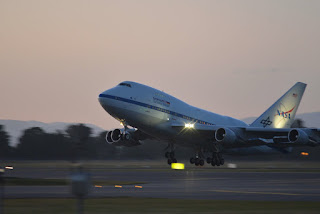 As a scientist, I see SOFIA as one of those great moments in the history of science that is opening a door. What is behind that door? - well, we are just now starting to find out. Scientists so often do not stop to think about what they are doing, why they are doing it, and how it gets done. In these days of mega-dollar NASA and NSF facilities with international components, scientists can have a feeling that these things are just put there for their use and it is only money. But, these things do not happen without dedicated and skilled people to make them happen. In some ways, we have made it too easy. The astronomer is too separated from the data and the process of getting it. Using Caltech as an example, it was just a few years ago that the Observer on the Palomar 200inch (for a long time the largest telescope in the world) would formally dress for dinner and sit at the head of the table. Going observing was a real event and was treated like a formal night of discovery. These days, we get to the site (if we can get there at all), grab a quick dinner and rush to the telescope, where we give a list of targets to the night assistant. We might even look outside once in a while, but not too often.

For twenty years now, I have worked to be sure that astronomers have gotten the best data possible. It was with SOFIA that I have truly seen the best of what can be done in the worst of circumstances. The astronomers are sometimes onboard with you, but mostly they are presented with the data that you worked so hard to get for them. They do not know how it is done. They do not thank anyone. For them, there is really no one to thank. I know I don't thank my internet router often enough…. 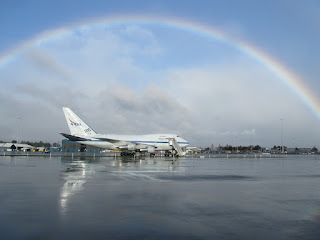 Well - I am an astronomer who does know. So, for all of them, and those that will come - I thank you for the work you do everyday to make SOFIA the magnificent machine that it is. Your contributions are changing textbooks and building a path to the future of infrared astronomy. That path is shrouded in the fog of the future. We cannot tell where it will lead. But, I, for one, am happy to take those uncertain steps with you.