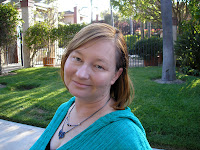 Deborah Levine Latter is many things, but perhaps the most the relevant in this context is "married to Bill." Although she is an astronomer at Caltech, with expertise in space-based observatory science operations and astronomical data archives, she has lately had difficulty concentrating on anything other than Bill's Death Valley effort. She is serving as something between Crew Chief and Chief Logistics Officer and will be on and off the course during the event making sure Bill and the rest of his crew are well supplied with ice, food, drink, clean laundry, crash space, quarters and dollars for the ice machines and moral support. She will be trying very hard not to scream "Stop this madness!" upon viewing and/or taping his feet. When she actually has time to think about other things, she creates equestrian-themed handmade jewelry (www.jewelrybydeborah.com), enjoys cooking, rides dressage, practices yoga, is slave to a Green Cheeked Conure and 3 cats,  reads tons of "popcorn" mysteries and some good books and spends entirely too much time playing Spider.  She's also been known to write poetry.
Bernhard Schulz 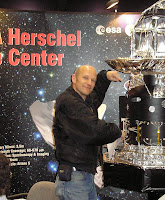 Bernhard Schulz is an astrophysicist working on astronomical instrumentation for space missions, primarily at far infrared and submillimeter wavelengths. He started his career after completing his PhD at the European Space Agency with the Infrared Space Observatory and is currently occupied with the Herschel Space Telescope at the California Institute of Technology. He holds a Diploma in Physics, a PhD in Astronomy, and is author and co-author of numerous publications in scientific journals. Married, with cats but no kids, he lives in California, pursuing, as far as his professional life allows, numerous other hobbies and interests, with photography, scuba diving, squash, aeromodeling and music being his older affections, while more recent activities include flying of single engine aircraft, film acting and videography. Bernhard says, "I think the reason why I am doing this has to do with the fact that extremes have always interested me. This is an opportunity to experience a very extreme place, experience extreme conditions and participate in a quite extreme activity. I guess the term extreme in the previous sentence could also be substituted somewhat by the meaning of new, unexplored, or special."
Nancy Silbermann 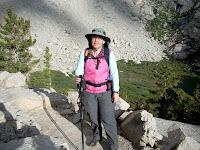 I live in Pasadena, CA. I enjoy walking everywhere (including to work). I took up hiking about 12 years ago and wander mostly in the local southern California mountains.  I have known Bill for over 10 years. Why am I helping crew for Bill? I have no idea. But I will be urging him along. 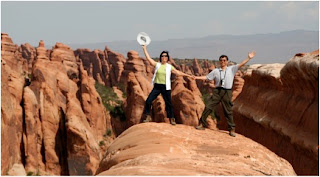 Yi Mei, System Engineer in NASA Herschel Science Center, CalTech, has been working with Bill in NASA/ESA space projects for more than 10 years.  Yi likes hiking, camping, skiing and photography.  She fell in love with Zumba dancing recently!  But she never had experience in 120 degree heat, like in the summer of Death Valley. Yi has a dream – our human being will conquer all the diseases in future! She believes a strong mind-set plays extremely important role there.  She admires Bill’s fighting attitude in Death Valley  Express.  She and her husband, Michael, and others will crew Bill’s Death Valley Express II.  That will a fun but tough adventure!

When I was a young boy, I joined a “Long March” running program, jogging 2 miles a day for 30 days. At that time, I felt it was hard for me! The purpose of that program was to let young kids to experience the hardship of Red Army’s Long March, when soldiers walked 8000 miles in 370 days.
Last year we went to Death Valley. While driving from Badwater to Mt Whitney, Yi told me Bill walked this way under 120 degree heat and will do it again next year. Is it physically and scientifically possible? I have serious doubt about it. I graduated from UCLA with a space physics degree and now work in an Aerospace and Defense Company. We test rockets and satellites to their limits. My physics “common sense” made me thinks that’s just a mission-impossible!
I am excited to be selected as one of Bill’s crewing members for this Death Valley Express II. I want see how this “Iron Man” challenges the laws of Physics. Who knows, maybe physics doesn’t apply here. Maybe the law of energy conservation will be modified. 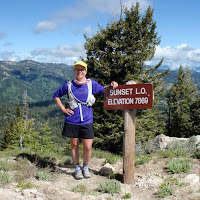 Jenny is a friend of Bill's and a fellow ultrarunner. She has run 18 marathons and 12 (official) ultras with her longest race being the Rocky Raccoon 100-Miler. Jenny started running trails about 2 years ago after moving to Boise, Idaho. She is serving as our "virtual" crew member - keeping everyone up-to-date on Bill's progress from the coolness of her home office by posting updates on his blog and Facebook page.